For this project we ask the researchers participants to engage individually for the duration of this block with a private or institutional space outside of a.pass. The task is: to negotiate a permanent, irreversible change in the architecture of that space and to document the negotiation process.
Changing our spatial circumstances, for adapting them to our needs, is so foreign to us in daily life, that we associate those changes with violence and social upheaval, with revolutions and public resistance. And maybe this holds true and points us to how powerful architecture actually is in upholding existing social order. Architecture and the political connect and hinge on access to change. Hegemonies manifest themselves and are upheld by architectural structures. So every attempt to change invariably become a political attempt.
We are framing the attempt of change as a research methodology
Taking the steps to negotiate a permanent change in an architectural setup reveals the internal structures of power distribution and decision making for any given space. If you want to propose a change, who do you contact? who will you be referred to? which groups need to come together under which premises and structures of decision making to allow for that change? To follow up those challenges to changes is to slowly reveal a diagram of power, an architecture within architecture. In fact those two architectures are inseparable from each other and we should invent ways of speaking of them as a whole. Would we have privacy if we never had walls, what kind of togetherness would we have if availability of space was not limited? Our way of living and our way of building cannot be separated from each other.

In this workshop we will look at the non physical borders of architecture: the contracts and agreements that create and maintain our built environment.
If you take a quick look around you and ask yourself how the things that surround you came to be the way they are, you will notice that all of them are man-made or man-transformed. Those processes of transformation are all initiated and facilitated through negotiations and agreements. The first step to connect contracts and architecture is therefore to realize that architecture is a product of an agreement. For our purposes we can loosely define a contract as a performative agreement.
During the workshop we will discuss further how architecture also embodies and ultimately maintains social agreements of that kind
This workshop proposes to look at the relationship between the architectural space and the contract through a series of collective building actions. We will use a simple material to build improvised structures together in order to understand how are we negotiating collaboration, aim and space. Which rules and ideological presupposition are at work? Can we come up with contracts, scores and sets of rules which would produce other architectures? What is the relationship between our social contract and the architecture we are able to produce?

‘IF YOU LIKE IT, THEN YOU SHOULD HAVE PUT A ROOF ON IT’
(and put some chairs under)
workshop-project by Jozef Wouters & Vladimir Miller

Roofs, in the arts, are often provided. In climates like Belgium, having a roof to work under is not a bad way to start. The roof protects the work (against more things than rain). But the roof also tends to isolate it. From time to time, artists grow tired of the roof and the walls and, hoping it doesn’t rain, decide to work on a square.
The work of a scenographer is often more about walls than about roofs (light designers don’t like scenographers who propose roofs). Walls are flexible. Walls can be discussed. Comparing this, it turns out to be way harder to negotiate about a roof and to design a roofed space that is a square as well.
This proposal is modifying the original “lets build a house together” idea, which was already presented at a.pass. The idea is, rather than overwhelming ourselves with the house building, to have a closer look (through working) at what we identify as two key elements of structuring community and social space by the means of architecture: roofs and chairs. In a much too simple way we can say that roofs bring a community together, while chairs can be used to structure its politics of attention and visibility. By avoiding walls we also subvert a key instrument to privatization of space. The space under the roof is accessible and public by design, we don’t have to distribute power/keys.

Luigi Coppola and Christophe Meierhans are working in different contexts and with different means about common decision taking procedures – or let’s say, alternative democracies. While Christophe proposes, in a lecture performance series, a new democratic system based on disqualifying people in charge, rather than electing them, Luigi is developing social choreographies as democratic models and is currently involved in a communal project of reorganizing the political, agricultural and economic system of a whole village in south Italy.
Together they propose a research workshop where most components of its activities will have to be decided commonly with the workshop participants. Just the very basic conditions are pre-determined: the workshop occupies a public space with only one person at the time – 24h a day. The rest of the group develops, discusses and observes the occupation from a distance and takes the relevant decisions.

During a period of 6 days, each participants are invited to host the rest of the group in their apartment for a day. We will cook together, discuss a series of texts, take turns using the shower and read bedtime stories from a book picked up from the shelf. We may find out about each other’s morning habits, favorite smoothie combination, different ways of folding the sheets.
For six days and five nights, this workshop will attempt to explore different ways of living and living together, focusing on the domestic sphere, our daily habits and their spatial manifestation, as well as on the ways these forms of life may or may not slip out of the window and down to the street. During each short residency we will collectively try to come up with a proposal for a small modification of or intervention in the space we are currently in, and negotiate its terms with our host. We may or may not carry out the proposal.

In 2012 a.pass merged the two sections a.s (advanced scenography) and a.pt (advanced performance training) to one singular program. This move was a consequence of understanding performance and scenography more and more as inseparable parts of one and the same discourse. But the merge of discourses finally reinforced the need for a new specification of the term “scenography”. What does it really mean beyond the classical stage practice? What else than a stage – and under which conditions – can be declared as a ‘scene’ and who or what is designing it? What distinguishes a ‘performative space’ from a ‘sceno-graphed’ space?
For discussing these questions Vladimir Miller gathered in the fall 2013 some space practitioners to a first ‘Scenography Workgroup Meeting’. In October 2014 he calls for a second one. It will be a public work meeting between and with artists, architects, and scenographers who engage in the production of temporary and performative architectures. They will critically explore the definition of scenography simply as ‘post-foundational architectures’.

This workshop explores the concept of pharmakon developed by the contemporary French philosopher Bernard Stiegler in his book ‘On pharmacology – how to live your life’. Stiegler uses the term pharmakon, which simultaneously stands for ‘poison’ and medicine’ as a symptom of an ever-spreading capitalism: an economy that does not only affect our labour, but does affect also our psychic ability and reduces our desires to simple drives. As both a medicine and a cure, Stiegler emphasizes the role of technology in our society as an ultimate pharmakon.
In his ‘pharmacology’, its doubleness is investigated as a possible ‘cure’: a strategy to deal with the recovery of our desires, to go against the pressure of identification trends, brands and an ever-increasing individualization. Pharmakon stands for the technical know-how we develop the strategies we use to build a different kind of future and to create another concept of our togetherness. But this is not without risk: pharmaka are both a source of misery and abuse of power, but also a stimuli of what makes life worthwhile.
The workshop is part of a ‘Thematics’ research project organized by Les Bains. Four artists are invited to explore in a three month residency set-ups of ‘trans-individuation’: how do we form temporary moments of sharing, how can we come together in diversity, how can we build together an organization of work and knowledge sharing that is open-ended for producing and opening up to an outside world. A constant process of infection and transformation, through testing and adjusting the dosage of the pharmakon.

The Ancient Greek word ‘pharmakon’ means ‘poison’, ‘medicine’ and ‘scapegoat’. According to the French philosopher Bernard Stiegler, our society urgently needs a ‘pharmacology’ to turn the tide of economic, ethical and cultural impoverishment. He says that we must urgently question our culture. With which witchcraft can we turn the poison into medicine?
Pharmakon: whitch culture? is a three-day ‘performative conference’ that examines artistic and theoretical strategies to counteract this pollution of our society’s culture. This congress is part of Thematics, a residency programme for artists and theorists run by Bains Connective workplace. This started in mid-October and is still on until 15 December, and is in its turn part of the transnational Pharmakon project organised by the Institut Nomade.

Program of the conference 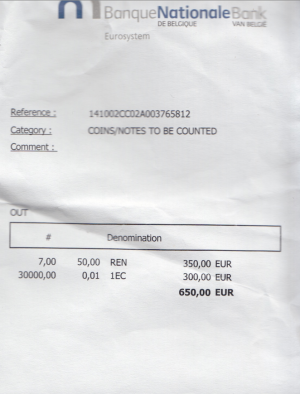 nationale bank exchange-receipt
Through the simple act of translating the materiality of money in to an other consistency without chaining its monetary value but to discard with this it’s functional usability, the sum of 650€ becomes an artifact - a sculpture in it self. The provided receipt is in so far the proof not only of an act of ‘buying’ the essential artifact of this act, but is part of it’s social plastic. Money is used here to create art in the most possible direct way.
Read more..