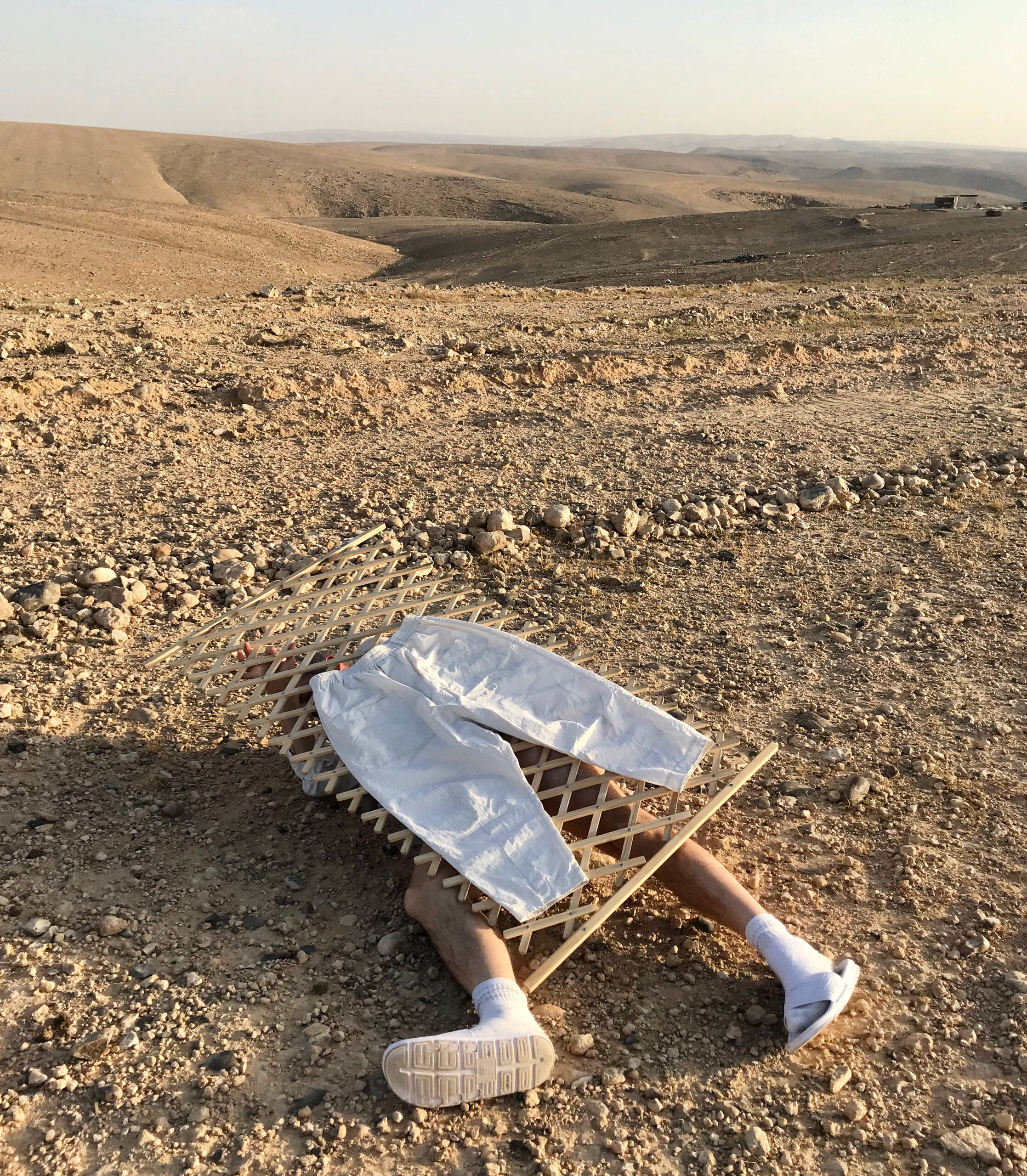 NOT at ZSenne ArtLab and NOT at Rosa Library, downtown Brussels

A practice of dismantling directs the conceptual and experiential nature of all their works. More than ever it is necessary to disassemble the mechanisms that form our relationships with the worlds around us in order to rebuild perspectives on those same worlds.

Using very different tools and methods the presented research insists on making visible the cultural constructions that knit our perceptions of history, language, science and fashion to their instituting frameworks. They dismantle the structural attachments we have to those institutional machines and re-tell other possible relations to them by opening up the capacity of bodies to their collective and personal resilience.

The capability of bodies to create spaces to nurture, find out and experience muted or unseen connections, may they be social, personal, economic, environmental, racial… Through performative virtual installations, readings and conversations, these research projects unfold space to engage differently in ecosystems of relations that permit perspectives affirming something other than the status quo.

For Dismantle Space, a website has been created in collaboration between the researchers and web designer and editor Sven Dehens in order to compile the works that have been developed in the frame of the artistic research environment of a.pass. This website hosts the complicities and differences of the four researches and it will address the infrastructural concerns each of them entails.

This public event is co-curated by the participants with the support of a.pass. In response to the Covid-19 imperative of not being able to gather and to accommodate the different natures of the works, the presentations will take place online. The construction of the website was a way to keep the works connected and conversing with each other.

Many thanks to ZSenne ArtLab and Rosa Library for their support, Sven Dehens for the website and Deborah Birch for text editing.

The research and work of Chloe Chignell is situated between choreography and literary practice. Throughout her a.pass trajectory Chloe worked with several performative dispositifs which use scores as mediators between body and language. With much precision her work performs the intra-dependencies between them in ways that facilitate and provoke in the viewer another understanding of how the body writes and reads itself.

Dismantle
Her work Poems and Other Emergencies dismantles the preconception that language can decipher and translate the body in an absolute and unidirectional manner. The prevailing cultural supremacy of language holds back other forms of knowledge and understanding of the body as a complex entity.

Space
While working at a.pass the processes Chloe created in physical space or on the space of the page triggers in the audience unforeseen attachments to cultural, social paradigms and relations between languages and mediums. For her End Presentation, the book becomes an object that expands the dimensions of the page, with the essays Language as Prosthesis and The Complete Text Would be Insufferable asking questions of the reading body, your body.

During their trajectory at a.pass, the research project of fashion practitioners Muslin Brothers – Tamar Levit and Yaen Levi –had focused on the uniform in correctional facilities. Their involvement with prisons and prisoners’ statements opened up a complex questioning of the garment-as-uniform and the process of uniformization. Using installation-performance as a research tool the artist duo created participatory situations that repositioned the role of the garment in its social, political, and economic functions. From staging the tailor’s atelier in several formats, the prayer book as a scored assembly, or audio files for confined self-appraisal they created critical environments that work to de-gender, de-class, and de-colonise clothing in contemporary society.

Dismantle
Their research dismantles the production chain and the economy behind the garment. Their work looks at fashion through the economy of belonging, establishing the strong relation between who-wears-what and the creation of harsh social segregation.

Space
Their research is manifested in performative installations that delay an easy identification with the garment by softening a space in which the participants can elaborate a collective and participatory questioning about this often ignored terrain.

Flávio Rodrigo’s research is a continual overlapping and unfolding of autobiographical writing, storytelling, and ritual. His work continues an oral tradition of recounting and holding to account that can re-tell history from the place of the minority. His research creates intersections between stories of racism and homophobia, auto-fiction, and ritual in order to claim power against normative politics in a non-normative way.

Dismantle
Flávio’s research investigates the body by shedding light on the scars we all have. Working with scars as relational objects from which narratives unfold, he creates the possibility for an understanding of the self as relation between physiological trace and mythical, political, and personal time.

Space
Flávio crafts rituals and participatory performances as a collective investigation into both the trauma and the many forms of healing that scars represent. These storytellings open up a space for the personal to be continuously woven into collective, political history, and affirm that the possibility of transformation is embedded in each of us, and in all of us collectively. For his End Presentation Flávio worked on a performance series The ghost scar solo that will be streamed in three episodes.
11th – 20:30 – Episode 1 – the ghost and the milk
12th – 20:30 – Episode 2 – the tent and the mirror
13th – 20:30 – Episode 3 – the body and the plate

The research of Christina Stadlbauer addresses the relationship between humans and other-than-human companions in the environment *we* share with *them*. Her approach tackles the ethical implications of the loss of habitat and the collapse of diversity. Christina engages with multiple actors in the fields of science and art, as well as with inhabitants of urban and non-urban environments, animal, vegetable, and mineral beings. She uses interviews, video footage, and performative installations to shine a light upon muted or undervalued situations of imbalance between human and other-than-human existences.

Dismantle
The recent focus of her work has been on the Museum as a public display of knowledge. Christina questions and deconstructs the infrastructure of the museum as a colonial institution which acquires, catalogues, and communicates knowledge in a human-centered manner, neglecting other life forms. Even though at this point in history, with an attempt to reformulate the definition of the Museum, lead by ICOM – the International Council of Museums – she maintains there is a persistent neglect of other species´ knowledge.

Space
Christina’s research engages in a re-imagining of the museum. A museum which explores through practice-based experiments and explorations how humans relate to other species, and dedicates itself to different forms of communication in search of a language between all parties.
For her End Presentation, Christina set a series of conversations with Agata Siniarska, choreographer, dramaturge and author; Lesley Kadish, anthropologist and specialist of disabled people in museums; and Maria Ptqk, curator and director of Museum Cabinet Sycorax. These conversations will be presented as podcasts and transcribed in text.

Chloe Chignell
Chloe Chignell (Australia) is a dancer and choreographer based in Brussels working across text, choreography and publishing. In 2019 she opened rile* a bookshop and project space for practices moving between publication and performance, with Sven Dehens. Her most recent work Poems and Other Emergencies premiered at Batard Festival Brussels 2020, and was supported by WorkspaceBrussels, BUDA Kortrijk, Lucy Geurin Inc and La Balsamine. She graduated from the research cycle at P.A.R.T.S (Brussels, 2018),  She has a Bachelor in Dance from Victorian College of the Arts, (Melbourne, 2013) and studied a writing and residency program at DOCH (Stockholm, 2017). As a choreographer Chloe has been commissioned by the Keir Choreographic Award for the creation of Deep Shine (Melbourne) touring to Japan for The Awaji Art Festival. She presented a short work forever in both directions for the Venice Biennale’s Biennale of Dance (2017). As a dancer Chloe has worked for Adriano Wilfert Jensen, Ingrid Berger Myhre, Anna Gaiotti, Gry Tingskog, Atlanta Eke, Ellen Söderhult, Phoebe Berglund and James Bachelor performing in Australia and across Europe. Chloe is co-editor of This Container magazine, currently in its 8th edition based between Stockholm, Brussels and Melbourne. Her writing has been published by This Container, Koreografi, Indigo Dance Magazine (PAF) and Realtime (Australia). She has developed choreographic writing and reading formats hosted by Kottinspektionen (Stockholm), PraxisFestivalen (Oslo), PAF (France) Scene:Bluss (Norway). She is co-initiator of PO$$E a dance and reading group .
www.chloechignell.com / www.rile.space / www.thiscontainer.com

Muslin Brothers – Tamar Levit and Yaen Levi
Muslin Brothers (Tamar Levit and Yaen Levi) acts as both a fashion brand and research studio speculating on the way personal, social, and political systems shape and are shaped through clothing. It is named after the muslin fabric widely used to make veils, men shirts, and clothing prototypes prior to production.
The duo’s work overlaps between wearables, spatial, performance, image-making, and exchange of information, using the technologies of clothes-wearing and clothing production lines for a poetic investigation into the biography of non-designer design.
They hold a B.A in fashion design, from Shenkar, college of engineering, design and art, Israel.
Their work has been shown in platforms such as the Kanal centre Pompidou Brussels, Parsons New York, Stockholm Art university, Israeli Museum,  the Tel Aviv Museum of Art, Jerusalem design week, and London and Tel Aviv fashion weeks. They were designers in residency at Arad contemporary art center (2020) Artez Academie Arnhem (2018) and London’s college CFE (2016). Winners of design award from the Israeli culture ministry (2018), and the pais grant for fashion design (2016).
www.muslinbrothers.com

*
Flávio Rodrigo
Flávio Rodrigo Orzari Ferreira, 37, gay, brazilian, artist, lives in Brussels. He is a performer. He holds a Bachelor’s Degree in Scenic Arts from State University of Campinas – UNICAMP (2004), a Specialization Degree in Psychopedagogy from FHO – UNIARARAS (2012), a Specialization Degree from UCB (2013) and a post-master degree in Performing Arts in a.pass (Advanced Performing and Scenography Studies – 2020). He is now undergoing a Master’s programme in Speculative Narration and Videography at the ERG (École de Recherche et Graphisme) de l’Université Saint Luc.

Christina Stadlbauer
Christina is an artist and researcher. She works at the cracks of arts and sciences, and develops her research around non human agencies – collective intelligence, interspecies communication and the relation between culture and nature. Christina obtained a PhD in Natural Sciences and her practice is informed and influenced by her scientific understanding. She has launched several artistic long term initiatives: like Melliferopolis, an artistic platform to engage with honeybees and their worlds, the Institute for Relocation of Biodiversity – an artistic container to explore the ethical implications of issues related with loss of habitat and the collapse of diversity, and Kin Tsugi Transformations, a work strand with bacteria that reflects on the ethics implied with microbiological lab work and our strive for control and imperfection.