how to document performance?

Proposed by Lilia Mestre for the Block 2015/I (January-March)

This score was a proposal to communicate through performance throughout the block. It focuses on performance as a tool for the transformation of thought, intuition, desire, referentiality, practice into a communication medium. How to introduce exposure, playfulness, risk, generosity, exchange, fuck fear, contamination and precision in our way of communicating? How does this communication produce desire? To whom, where and how is this desire directed? What is the intensity/quality of it? What is the political agency of it?

The aim was to develop systems to practice the staging of philosophy, critical exposure and the rhetorics inherent to any body, object, word, situation. It is a working score. Taking as a principle that the artwork raises questions and doesn’t give answers I would like to propose a Q&A in 9 sessions where we can just perform. The series of performances will function as replies that raise (an)other(s) question(s) or problematic (s). This score will also be a documentation practice that questions performance as a document.

The invitation is to meet once a week for 3 hours and work together. These meetings will have to happen after 17:00 and can take place in different environments.

14 January in the afternoon. (last day of opening week)

In this meeting we’ll set up the frame that will accompany the score for the 9 sessions.

We’ll assign to whom we are addressing the first performances.

*Every participant will display a 5 minutes performance as a gift.

*After performance the participant will assign a participant that will reply the week after.

*Discussion about the problematics that emerged.

*We’ll choose for a space and time for the next session.

*Every participant will display her /his response in a 5 minutes performance.

*After all presentations we’ll assign together the next repliers.

*Discussion about the problematics that emerged.

*We’ll choose for a space and time for the next session.

All performances will be filmed in the same format. Julia Clever (ex-a.pass working on documentary) will be working with us. All next repliers can take a video home to work on their responses.

We’ll think and work together on the notion of archive and of performance as documentation. 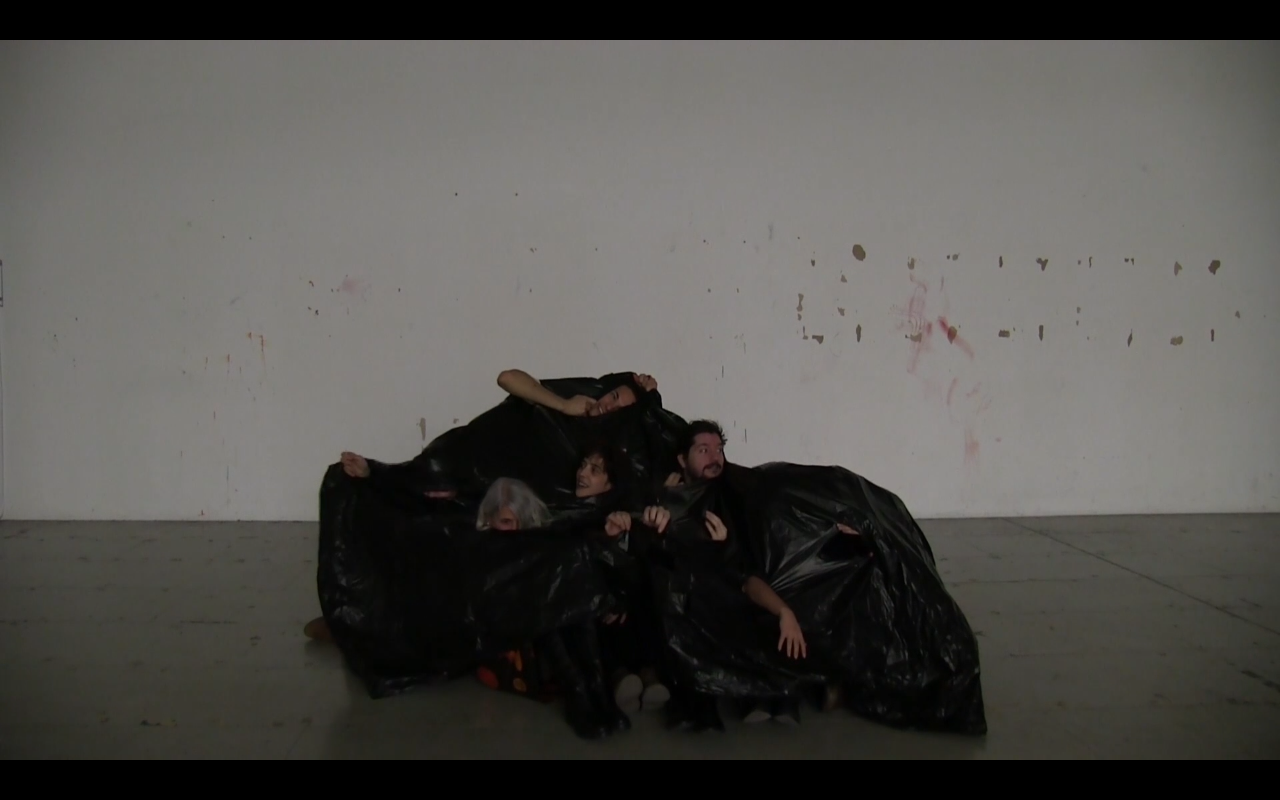 Excerps from my experiments from the workshop “Perform Back Score” that was lead by LILIA MESTRE.
The experiments were 5 minutes performances that were a reaction to others performance that were done the week before.

As the time goes by slowly when watching a 5 minute long live performance on screen, and because my set-ups had an animated quality about them, I sped it up !
Much more fun that way. 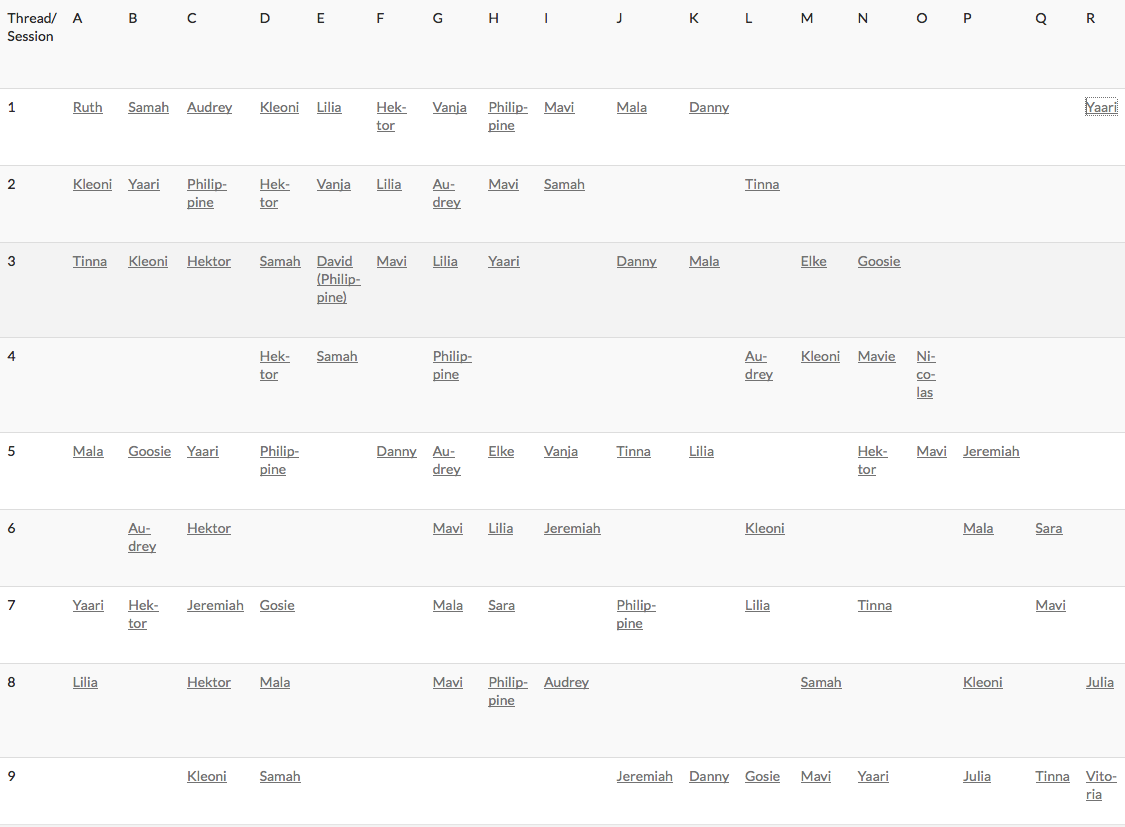 pbs grid
This grid was created by Julia Clever to consult the videos filmed during the 9 sessions of the Perform Back Score. It is alined by sessions chronologically indicated by numbers and the lettered threads created by responding to each others performances. The links will get you to a protected vimeo page. Some of the participants of Perform Back Score made their videos public. Enjoy watching, and handle the material with care!
Read more..

CONDITIONS FOR THE EMERGENCE OF POETICS

webpics_apass14
The proposal is to plunge into the conditions for the emergence of poetics. Poetics used here as acts that transform our ways of perceiving, situations that invite another understanding of ‘things’. If we think performance as the coming-forth of those acts, as a framed re-actualization of what is there (a part of the world) we can give focus to the relations
Read more..

eric thielemans
With the workshop on 'Repertoire', proposed by Eric Thielemans, will not only bring us close to the background of each our’s researches, but confront us with the question what the self-built conditions of our practices are.
Read more..

Beckett_Score
The workshop starts from the assumption that the work of Samuel Beckett can offer a variety of tools for contemporary forms of artistic research. In the workshop we will focus on absurdity, melancholy, exhaustion, sense/nonsense and emptiness as main signifiers of Beckett’s work for stage, TV and film. We will watch and analyse selected scripts, dialogues, spatial set-ups and performances in order to transform them into our own experiments, exercises and techniques using body, space, camera and text.
Read more..

Bildschirmfoto 2014-11-25 um 15.08.43
Choreo-graphic Figures - Deviations from the Line is an interdisciplinary collaboration involving artist Nikolaus Gansterer, choreographer Mariella Greil and writer-artist Emma Cocker. The project unfolds through two interconnected aims: we are interested in the nature of ‘thinking-feeling-knowing’ operative within artistic practice, and seek to develop systems of notation for sharing and reflecting on this often hidden or undisclosed aspect of the creative process.
Read more..

Daniel Blanga-Gubbay Conditions for something to happen (latent performances)

How is it possible to go beyond the idea of creating something to suddenly create a space ready for the emergence of something unspecific to happen? By merging theory and practice - working both through interventions in given and constructed space - Daniel Blanga-Gubay let the participates of this workshop investigate not only the question "what are the condition for the emergence of an action", but eventually "what does it mean to create (and abandon) a space filled with unforeseen possible actions?"
Read more..

Antonia Baehr “When this you see remember me.” *

In this workshop, we will investigate how scores can function as a constitutive factor for kinship relations. We will write scores as gifts to each other, and I will share some of ‚ “make up productions‚” working methods with you. This workshop examines the boundaries between score/interpretation, rehearsal/performance, director/performer, and audience/presentation. This workshop’s focus is an investigation through praxis.
Read more..