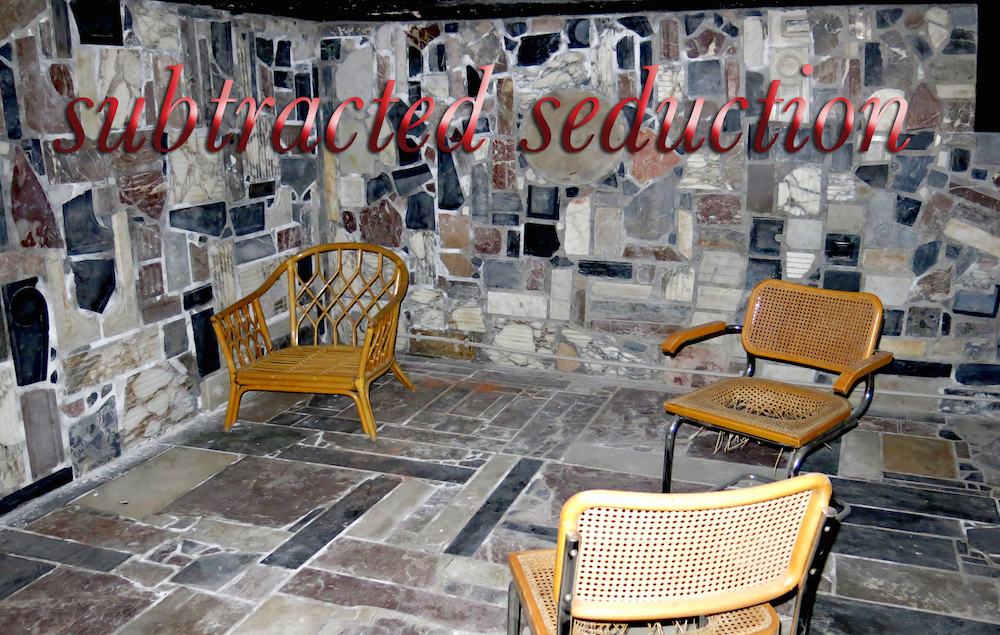 On Friday 1 and Saturday 2 February 2019, from 18:00 to 22:00 Adrijana Gvozdenović, Pia Louwerens and Eleanor Ivory Weber present their artistic researches at the former swingers club, La Porte des Senses, today an art space called Hectolitre, to mark the end of their participation in the a.pass program.

With Subtracted Seduction, their individual researches are framed through shared concepts such as anxiety, non-consensual collaboration, authorship and institutional critique. In each of the three approaches, narratives created through these symptoms of the contemporary artist are investigated. The romantic artist is negated and the multi-faceted artist materialises as both instigator and instigated, made up of multiple voices. The three researchers engage with the complexity of being both unnameable and contained in the knowledge-network immanent to the institution. There appears Subtracted Seduction.

Gvozdenović, Louwerens and Weber all work with writing and performance. They use notions of script and publication as tools to reveal contexts as partners to the doing and thinking of artistic practice. The institutional is key to their approaches, both as a way to understand what predetermines the performativity of the artwork and in how it relates to issues of authorship. The question is often, “who is voicing?”

Pia Louwerens works with spoken-word performances in which she performs an unreliable subject intra-acting with its institutional framework.
Eleanor Ivory Weber uses conceptual writing techniques to arrive at multi-vocal recompositions of existing text-sources, combining formal structures with the spontaneity of the body.
Adrijana Gvozdenović collects and annotates symptomatic artistic practices that recognise their anxiety as a prerequisite state for criticality. This results in publications of sorts or “exhibiting otherwise”.

The concept of the anarchive as a way to reactivate meaning through revisiting traces is a common process to the three researches. Through either activating authored texts, institutional conditions and/or artistic practice paraphernalia, new iterations appear that re-actualise and re-situate the event. Each variation is always already allied with new subjectivities.

Schedule of the event: