The concept of the workshop is, after a careful reading of the text beneath, to devise a meaningful action focussing on the perceived gap in the flow of the current system politics and technics, which could lead to the premature extinction of life on this planet, our universe and every memory of it. This device should be thought as “meta-revolutionary”; i.e. attacking from within the revolutionary flow of the allied powers of technics and capital. This action, sabotage, construct, accusation is done as a dry run, a kind of dummy crash test.

Using any tools, concentrate in a group of several A4 formats your interpretation of a “vertical” or “meta-revolutionary” investment on the techno-capitalistic maze. It could range from text into video stills, passing through drawings, schemes, maps, a score or performance instructions.

With the conscious danger of falling back into romanticist politics and trying to avoid this trap, I would like to take up this idea of an ethical or even several ethical lines to think drawing as one of the tools we have to challenge politics of smoothing and soothing the collective body into mindless consumerism. It is important to state that this collective body still has a human multitudinous and restless soul, from which annoying and frequent twitches call for permanent police vigilance. Moreover this body comes out of the box including technology and complete ecosystems. So there comes a time when the soul struggles and seems itself forced to draw painful lines of choice, discovery, and the recovery of concepts and criticism.

Theoretically I searched for a possible realm of production to cope with these requirements; to fight for the survival of the soul, in a vast temple contained within the language treasures, and against fatal deterritorialization posed by blind profit and fear of death, the main drive for the technological twilight of difference. As such my hypothesis followed the non-official Marxist approach to the birth of Design. In this version, Design appears as a consequence of the opening between the capitalist/investor and the workforce in the manufacture stage of the base structure, during the eighteenth century. In the void posed by the disappearance of the workshop master and appearance of the unskilled and malnourished workforces of the modern proletariat, someone was simply needed to define the “life form” of the product.

The material history proceeds to create these openings in which ethics in the shape of rational decisions, intuitions, fears or desires are invested. The first professionals were infused with the urge to contribute to optimze selling performance and industry profit but others, as William Morris and Robert Owen raised themselves above these needs and thought alternatives created by craft and socialism. Contrary to this political view, the all-pervasive and everyday dominating concept of Design, drawn heavily from art history is generally tainted with a functionalist aestheticist teleology, so that to follow the Marxist argument, focusing the ethics upon these openings briefly unchecked by the tightening grid of technocracy, requires newcritical coping concepts. We can now recall the intermingled relation between revolution and order to develop it a little further.

“Order” can be thought as an investment of language, through design and technical manipulation, from within the system to regain sense and control of experience. This orderly effort of drawing a line in the “chaos” can be defined further by another new concept. The old French concept of “Revolution”, now an orphaned concept is taken over by a kind counter-revolution or better called “meta-revolution”. Meta-revolution is a meaningful action placed over the common revolutionary events, like for instance the galloping technological development. The structure of this meta-revolutionary actions can be given by a kind of absent god in language, an imperious demand comes from a higher plane revealed by poetry or a heightened clairvoyance on processes. So, Meta-revolution is a production aimed and vertically inspired by a God/summa artis, on “openings” that comes to be perceived through the revolutionary stretching of the reality fabric fed by capital and technology. Meta-revolution is aimed at a dynamic flow of seemingly unstoppable events, and not, like the classical Gramscian concept of revolution, a hegemonic consequence aimed at a decaying systemic status, like an old political regime or better, a decaying macro-economic system. Following Heidegger, these so called “openings” are the results of the disclosure brought forth by the work of art. This conservative view can be eschewed as long as we sustain a critique into the limited role or the art world in this case and herald a wider participation of the critical mind through writing, plotting, mapping, drawing from experience in the world. The orientation of the intellectual in this effort creates an example from where to draw design investment with a political purpose for common survival.

Gonçalo Pena was born in Lisbon, 1967. He works as an Artist in various media but mainly painting, based in Lisbon and occasionally elsewhere. Recently a book was published with is drawing work in Mousse Publishing. With an extensive teaching experience. Currently his field of research in the context of a PhD, is about Design theory and politics.

Samah Hijawi, Philippine Hoegen, Gosie Vervloessem, Sarah Santos, Silvia Pereira, and Cecilia Molano will share their practices and perspectives of their research in form or a symposium and bring them in relation to those of guests and collaborators. A symposium that consists of performances, lectures, film screenings and workshops.

volver_logo
Here you can find the detailed program of VOLVER; the a.pass end-presentations and conference on Friday and Saturday 29th/30th of Mai 2015
Read more.. 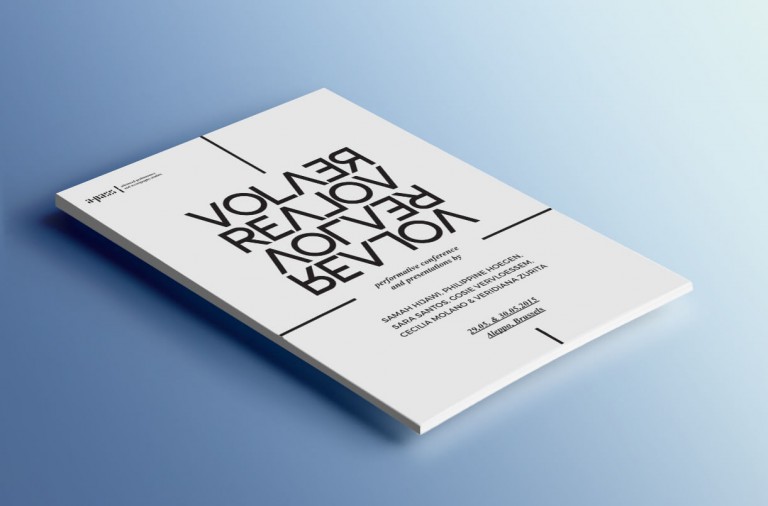 brochure volver
This brochure contains texts and interviews by the presenting participants and the other contributors of the VOLVER conference that took place on the 29th and 30th of May 2015. Performances, film screenings, installations workshops were presented to share in the artistic research processes that participans followed during their year at a.pass, alongside with lectures and presentations by the guests of the researchers: Patricia Reed, Gonçalo Pena and Petra van Brabant.
Read more..
Order this publication.