starting to speak in English

(this gift is made with images of the block)

Before to start: Excerpts from my application     // Investigation purpose (2017)

Title: Derivatives around the construction of “the Latin imaginary” in Brussels context

This work takes the reflection as a topic concerning “the Latin imaginary”[1] in Brussels context. As a starting point, it considers “the Latin imaginary” as a construction which is imagined by people who perceive themselves like “Latin people”, in terms of Imagined Communities. The aim is to study how this imaginary is composed of images, desires and motivations depositories that move around in the plot of signs in semio-capitalism.

The questions that give rise to this project are: how is “the Latin imaginary” constructed? Which signs are reproduced by this construction? How are Latin bodies perceived in Brussels context? And how is it possible to make artistic operation on this imaginary?

Regarding theoretical tools, it is worth mentioning that “the Latin issue” is analysed taking into account the concept of Imagined Communities by Benedict Anderson. As a matter of fact, his work pays attention to the concept of nation, his definition is used here to talk about the “Latin Imaginary Community”. In relation to that, Anderson propounds that “it is imagined as a community, because, regardless of the actual inequality and exploitation that may prevail in each, the nation is always conceived as a deep, horizontal comradeship” (1983: 7). This description is useful to think about the imaginary shared with others in terms of community.

Considering this, the field work relative to “the Latin imaginary” is focused on sign production in the current context of semio-capitalism. In this way, a study of the concept by Franco Berardi (known as Bifo) is carried out; he defined semio-capitalism “when informational technologies make possible a full integration of linguistic labour with capital valorisation” (2009: 149). In other words, when all acts of transformation could be substituted by information and the work process is based on signs combination. Bifo says that economy incorporates factors like instability and indefiniteness when valorisation depended on language, and “in turn language incorporates economic rules of competition, shortage, and overproduction” (2009: 149). Therefore, semiotic overproduction has consequences in the economy and in the psycho-sphere, due to acceleration of perception, which generates a dis-sensitization in bodies, and becomes pathologies and psychotropic drugs dependence. One of the possible ways for facing these symptoms is to go back to the question about body perception on others. In relation to this, the author proposes that “in order to experience the other as a sensorial body, you need time, time to caress and smell. The time for empathy is lacking, because stimulation has become too intense” (2009: 85).

Finally, as a theoretical mention, contributions that promote and accompany these questions are taken into account transversely in relation to “the Latin imaginary”. On the one hand, the perspective of “internal colonialism”, which refers to the reproduction of the colonialism towards the interior of the ex-colonies and which takes as a reference the centres of power in the North-Hemisphere (Gonzalez Casanova: 2015). On the other hand, the heteronormativity existing in the perception of the sexed bodies and the stability of the gender, which depends on the alignment among sex and gender (Butler: 1990).

[1] Due to the absence of a more appropriate terminology to translate “lo latino”, it was chosen the phrase “the Latin imaginary” owing to its relevance in relation to the imaginaries.

It was the first time I explained this project in English, I learned by heart most of my presentation. As you can see in my application, I started looking at the stereotype construction of Latin-imaginary through two concepts: semio-capitalism and imaginary communities. I was busy with how reggaeton videos and specially Despacito framed a stereotyped way of look at “latiness”.

A.pass people were invited to be in front of yours computer, anywhere in order to do comments at 15h of Monday 18th June.

That day they received a mail with a link to a first video in the platform Youtube.

The video showed the short plane of Caterina with an analogic voice. The voice invited people to follow a second video and set up the lyrics of a reggeaton, through comments of the video of “Gasoline”, one of the first most famous reggetons. The “real” voice of Caterina is only heard when she sings the chorus of the song. And the is translated by the analogical voice:
She likes gasoline (give me more gas),

How she loves gasoline (give me more gas),

She likes gasoline (give me more gas),

How she loves gasoline (give me more gas)

And then the voice invited people to think in imaginary related to Latin people and latiness.

But the second video consisted of a white image for 2 minutes, then a plane of Caterina dancing and then a black image.

This comments were used for set up the lyrics of a song: Reggeaton 1.

Invitation 2 people to reproduce as much as possible one of the screenshot of Despacito. They chose between 4 options.

If people don’t want to appear, there were many options to be far away of the camera. It will not be public.

Caterina bring some stuff in order to help in the reproduction and makes them indicate consent to publish photos of the participants .

THOSE PHOTOS are only public for documentation. 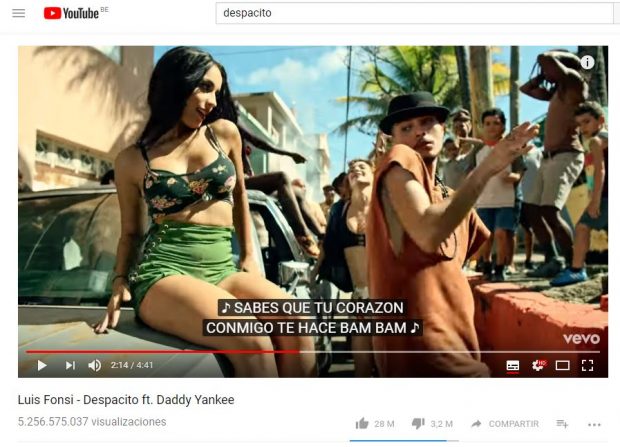 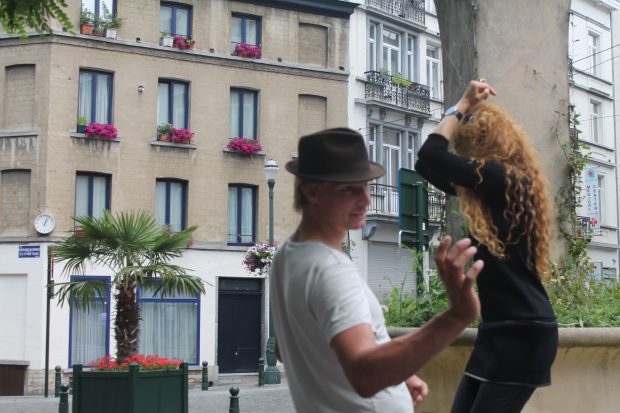 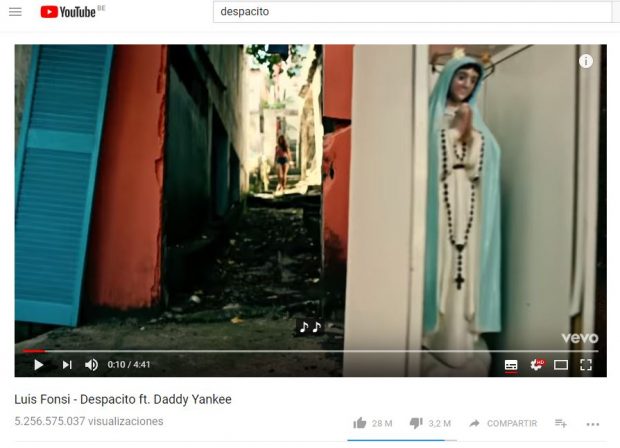 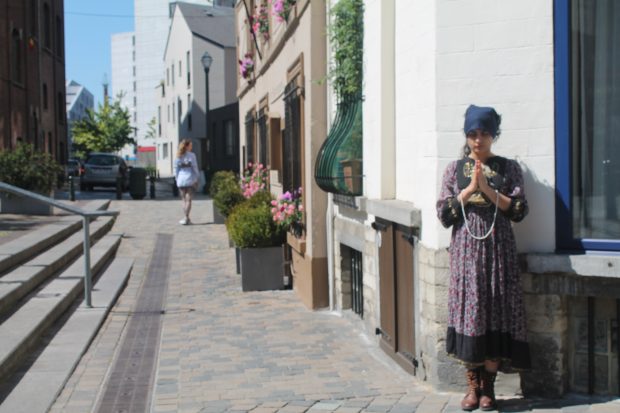 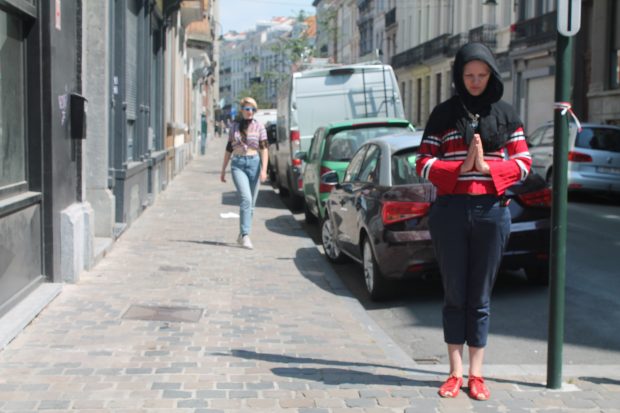 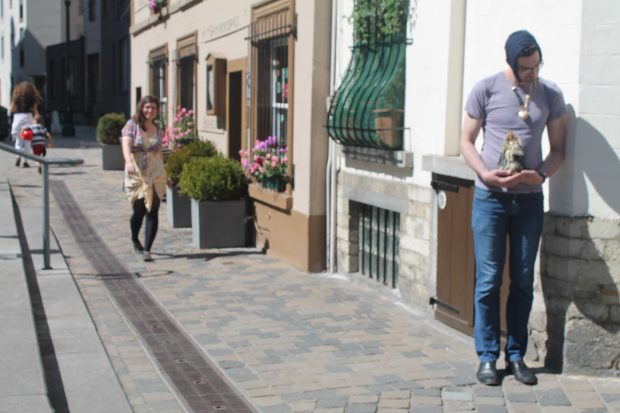 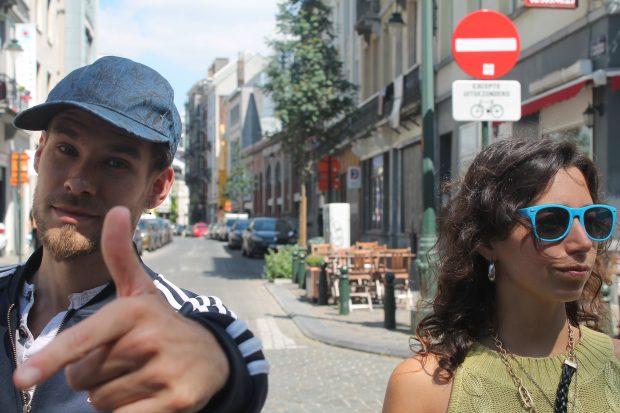 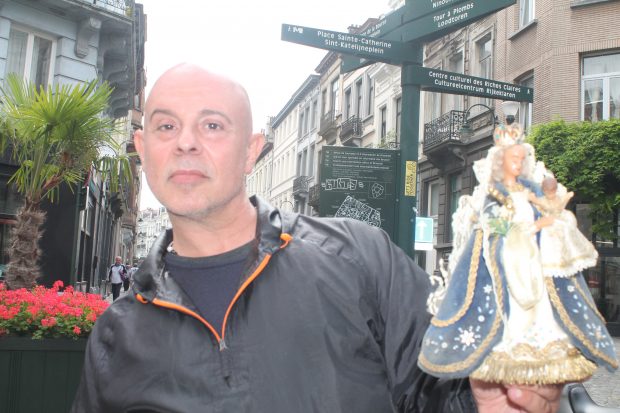 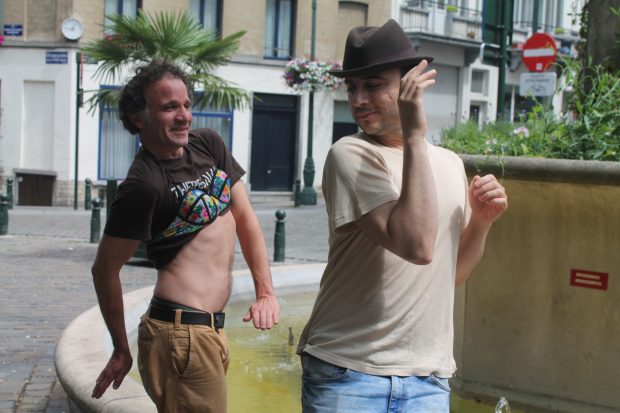 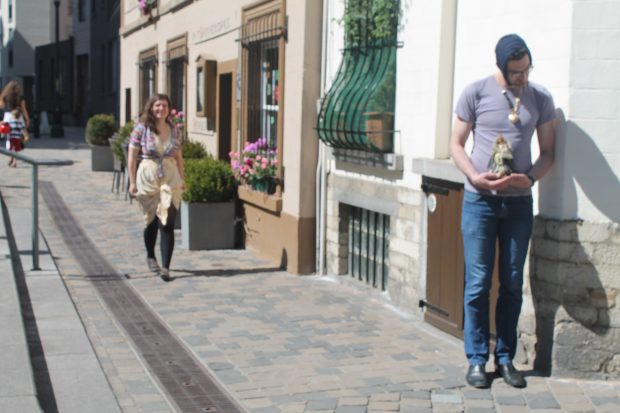 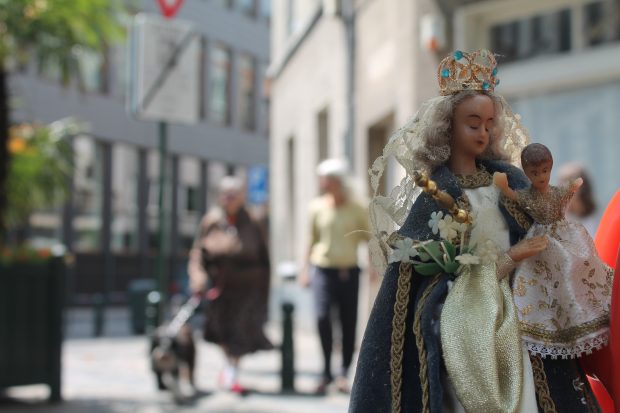 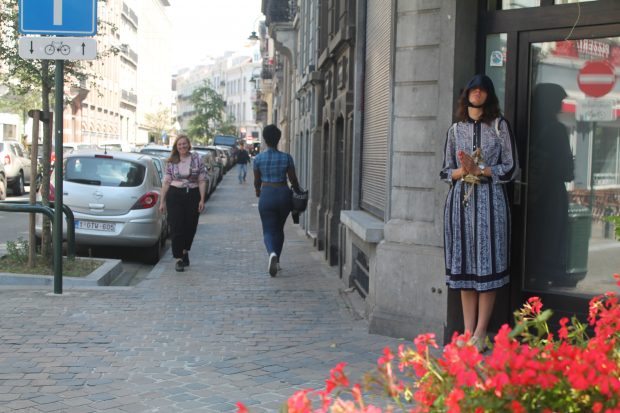 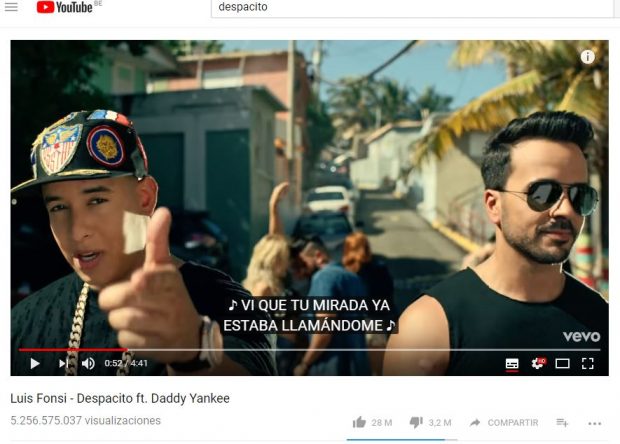 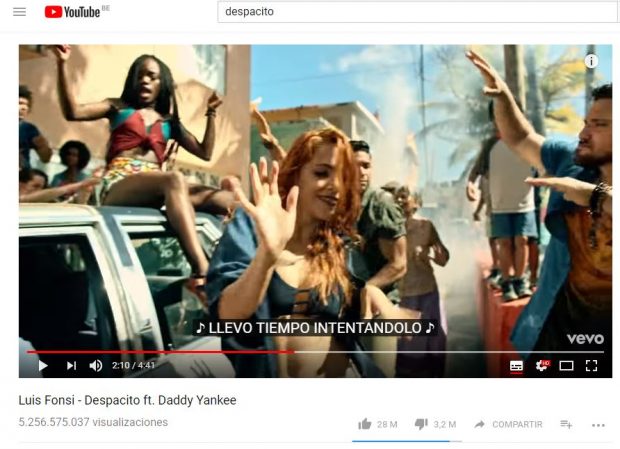 Invitation à The only proposition was bring Latin clothes.

Morning brunch at my home in Ixelles. Invitation to do this parallel activities –>

People were at the garden of where I live.

It was a sunny day.

They marked in maps different places related to latin culture. 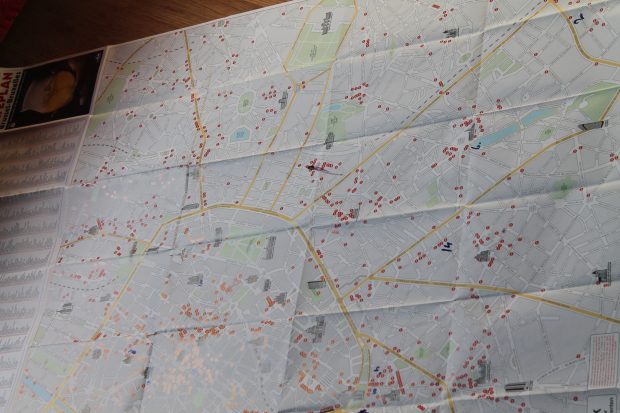 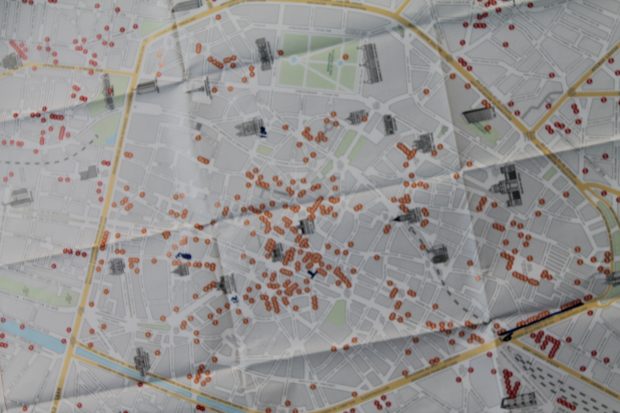 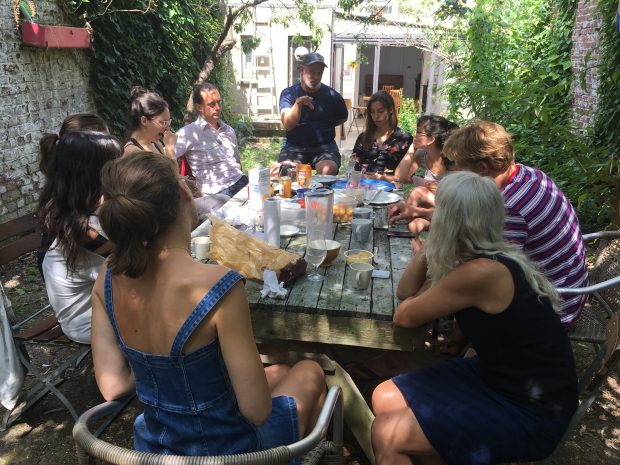 – I showed the song that I did and the lyrics. Here you can listen here

or you just don’t care

i find your spanish difficult to understand x2

order insubordination submission I think the second video has some problemsnow I understand sorry KI can see it only in white without any images,is it the same for the others? x3

– After, I asked apass people to choose a part of the lyrics and make a short video with that. They could recognize the lyrics that they wrote, or to choose one prhase. They had to create a movement for that. They shotted each other with the explanation and they could include the clothes. They gave me permission for internal use.

From those videos I did another song. People were strefull because of the task of the camera. They name an anxious problem in my research and in the way that I was producing.

I explained the CRI. I sang both songs and exposed my problems. I said that I was doing a circular mouvement, because I was stereotyping all my view. At that moment, I was trying to understand who I am in the research. That´s why I presented the animal “Yaguateré”. I presented the Reggaeton 2 with a an edited a video which has images of apass participants. I prefer to not pubic this video and the lyrics of the Reggaeton 2.

The body is a problem. We are busy with its problems // make sure that we have all the details // she flies // magical realism of South-America

You are completely disarm, freedom, you don’t need to protect your body. // You feel good in it, you feel bbq. Leisure time. // body is so a costume, is difficult to get rid of. //  to lie down I chose and try to move without moving.

Latino stereotype,I think is not. // Not only because of the latino people //

“The hand of God” is Maradona scored against England. // I bought in Mexico, it has Jesus on it. //

catholicism and the imagery // To me is super latin // Shiny and synthetic.

Over commodify presentation of latino culture. // I am not sure.

Gaze is on the back, someone enjoying it.  // knees are flexed, the pelvis is moving back and forward quite fast, // Breast, shoulders, from the left to right, fors coming movements. // Looking in the eyes // is active, seduces. // excites // excites // sexual desire

I could recognize this big problem in my first Block. In Adva´s words: ‘ you stereotype me by asking me to stereotype you’. That´s mean that I was stereotying others.

Somehow, I fell into my own trap. 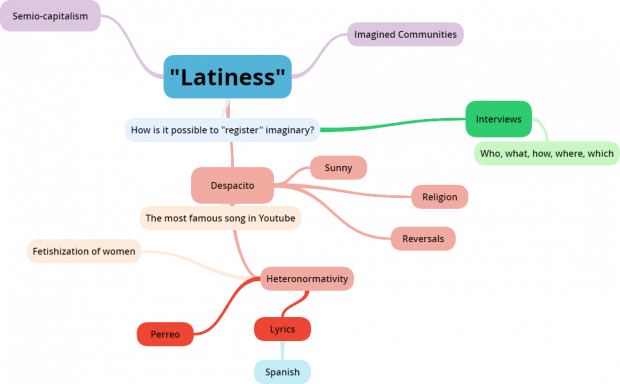 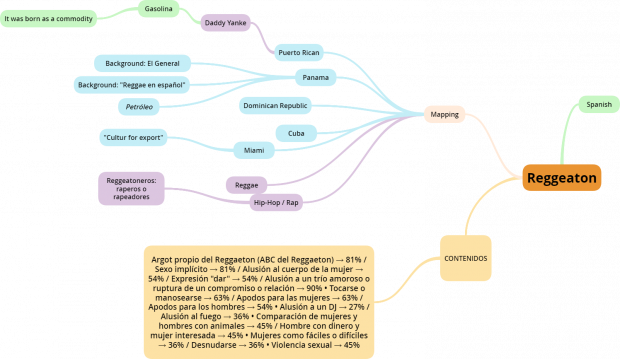 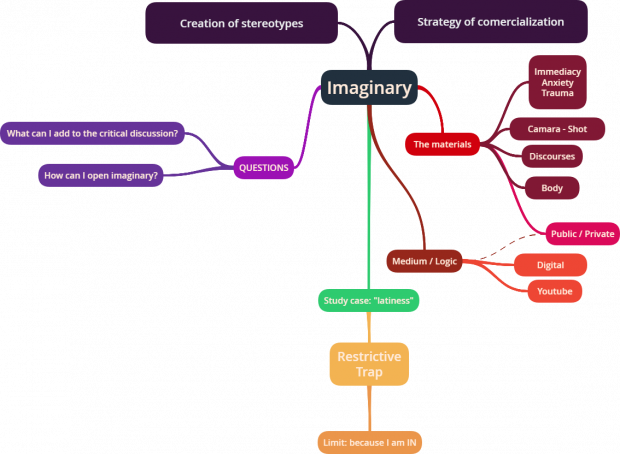 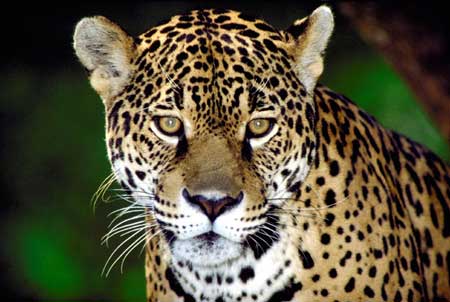 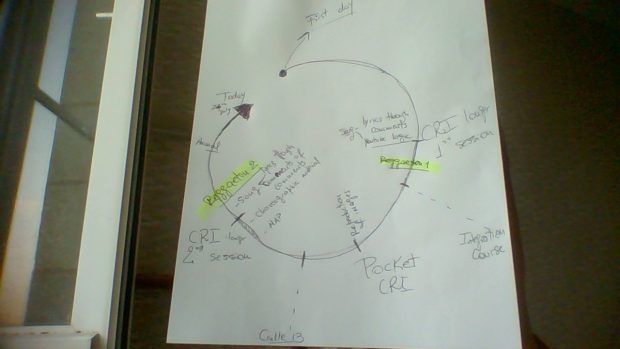 The “trauma” → caused by necessity to answer, give, produce → the “conditions” of the experiments

Obscenity: how to show the body (connected to media)

In which sense do I want to talk? → stereotype way or not?

Problems of images: how can I expand more, open, and not restrict them?

What is Latin for me, NOW? → SUPER excellent question to continue

What is doing the “the art of super identification”?

The power role of being able to see and be seen –> what is producing the objectification?